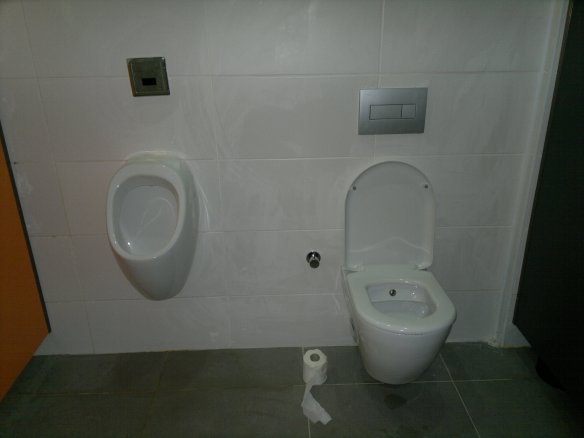 Does this strike anyone else as odd?

More on this later.

It seems to be the fashion in ebook publishing these days to release books in parts. Give away part one and charge for parts two, three, four and five. I’m not like that (yet). You can get all parts of this blog for free.

One of my earliest memories is of having my head in a newspaper-lined bucket being violently ill. As a young boy I suffered horribly with travel sickness. I’d only need to be in the car for five minutes before I started turning green around the gills. Ten minutes and I was breaking out in a prickly sweat. Any journey over fifteen minutes and you could bet a month’s pay I’d vomit. Hence the bucket was always in the car. In the end I think it became psychosomatic. I’d only have to see a newspaper-lined bucket, I’d only have to smell it and my gorge would be rising. Even if the car was stationary on the front drive. I know because my parents insisted we try it once.

My parents tried sitting me everywhere in the car. I tried the back seat, the front seat, and my dad’s lap when he was driving. I even made a few journeys in the boot. (It was a Fiat 127 hatchback and they took the parcel shelf out so we could still talk to each other.) Nothing helped because I suffered from travel sickness. And when you suffer from something it doesn’t matter where you sit.

Anyway. I grew out of it. Eventually. Travel sickness is not something that has troubled me for over forty years.

Last week I blogged about my enjoyable and varied commute across Istanbul. But it was only for the orientation week. This week, I started at my new campus which, it turns out, is one hour and eleven minutes away by school minibus. On a clearish run. Can you guess what’s coming up? Apart from the contents of my stomach on a daily basis?

It started on Monday. I have to get up pretty early now and I don’t have time for breakfast. I get picked up at the top of the road just before seven. (Insane!) And then I have the journey.

I want to share with you a video. It’s not of my actual morning commute across Istanbul but it’s pretty close.

(It took me until the ninth viewing of this video to see that the dad says he feels sick before they take off and then, when he pukes some of it goes in his daughter’s face and then she looks like she’s going to throw up, too. I haven’t laughed so much for ages.)

Honestly, these Turkish drivers are crazy. They all think they’re Sterling Moss and have divine rights over other road users, even when the other road user is driving a twenty ton construction lorry. For a joke, I suggested we have a sweep stake on how many accidents we have this year. That didn’t go down well in a highly superstitious culture. Lots of mumblings from the Turkish natives. I caught the word ‘jinx’.

So back to Monday. I’m in the fourth row of a packed minibus. The trapped air is stale and stifling. The morning sun is low and its heat pounds on the glass and metal of our oven on wheels. (Remember, in Turkey one can’t have windows open because of the airborne viruses that will flood in and kill us all.)

We hadn’t gone a couple of miles of erratic stop start Turkish driving before a dim and distant memory was stirred. And then the previous night’s kebab. I got very hot and I could feel myself turning pale.

‘Blimey, you don’t look so good, mate. Are you going to be sick?’ said the arsehole next to me.

That helped. I’m trying not to think about being sick in the school minibus that happens to be full of teachers – people who I don’t know yet and he’s talking about it. To me.

I remember dry retching into my hand and what do you think my ‘concerned’ colleague did then? Yes. He shoved his morning newspaper under my nose and said, ‘Catch it in this.’

It’s Friday. I’ve been sick three times this week. All on different days. There’s nothing I can do about it. One good thing – with my vomiting and jinxing, over half the teachers have decided to make their own way to work, so I get the whole back row to myself. Lying down helps. Only another eleven months to go.

Back to that image.

After my initial shock on discovering this facility at my new place of work, I wondered whether it was simply a refreshingly liberal approach to the unisex toilet concept. It’s not. It’s just for men. But that doesn’t make this particular juxtaposition of urinal and bog any more understandable, to me.

On a more personally meaningful level, walking into this lavatory fairly took my breath away, and it had nothing to do with the bloke standing at the sink, washing his hands and grinning.

This image is one of my repeating nightmares physically realised; a horror of my darkest subconscious brought to life. In my nightmares I’m desperate for the toilet (usually number twos) and the only toilet I can find is one in plain view of everyone. But no one is around and I’m so desperate I have to go. And I do. In my dreams, I’ve just reached the point of no return: I’m in the act of releasing the hounds – their leads are off – when the room starts filling with people. That’s usually when I wake up, sweating, gasping for breath and fumbling around in the bed sheets to learn whether I’ve crossed a line. (For the record I have never followed through, so to speak, with my bodily functions in my dreams.)

Back to this toilet. I have no intention of using it, no matter how desperate I am. (There is no lock on the door to the room, which opens onto a busy corridor.) I don’t even think I’ll use the urinal. I mean, can you imagine how embarrassing it would be to be making use of either item of sanitary ware and someone walks in to use the other? (Note roll of bog paper on the floor indicating someone is using it already.) You’d have to acknowledge each other. Eye contact would be inevitable. And then how could one not say something. If I was standing there taking a piss and someone came in for a dump I wouldn’t be able to stop myself from bursting out laughing. Even if I didn’t know them. It would be so embarrassing to have to stand there listening to them evacuating their bowels. And the smell. No, it’s not right. I can’t imagine what was going through the minds of those involved in the process of planning to installation. It reminds me of the wheelchair access ramp fitted at my old school. (Always worth including my favourite image of all time.)

Good news for me this week is that I’m back doing what I enjoy most – making up stories and then writing them down. Monday evening, after the Halfling had finally succumbed to sleep, I opened up a bottle of wine and then the file on my computer that holds the second Booker & Cash. I had fifty thousand words done before I stopped for the summer break and couldn’t remember much of it. (Probably not a good sign, I thought.) But I like it a lot. It made me laugh in a couple of places. Most of the unfolding plot surprised me as I was going along, which was nice to experience, although, again, as the author mildly disturbing.

As well as a couple of deliberate chuckles I came across a couple of accidental ones that I think are worth sharing here.

We were almost at the car when I let out a loud, ‘Shit!’  (Need to be careful with the punctuation on that one.)

A man clutching a couple of straining black bin bags came struggling up the stairs from the basement flat. He spared us a cursory glance as he tossed his load into a wheelie bin.

On second thoughts maybe I’ll leave them in.