In my last days in Ankara, as the clock ticked down to my leaving date, I worked quite feverishly on a story that had gripped me in its unfolding. I have called it The Fallen Agent. I have plans to make it the first of a few featuring the main character. I do like a series.

For a change, for me, the lead is female. Her name is Jess Albion. It needed to be pointed out to me that all my leading ladies’ names start with the letter ‘J’: Joy, Jo and now Jess. I cannot explain this attraction to the ‘J’ sound. Do I need to?

Jess Albion has recently started a new life on the other side of the world with a new identity. She used to be MI5. Then a job went bad, someone died and she was made an example of in the British courts. But MI5 look after their own. Or they did until rumours of a planned Al Qaeda biological terror attack on London started circulating. Now someone in the British security services is giving agents up in return for information. No price, it seems, is too high to save London from the ultimate threat.

When Jess’s fresh start is compromised she has a choice to make: run and hide and spend the rest of her life looking over her shoulder or go looking for the threat and snuff it out. On her own, she’d run, but she has Nick on her side.

The Fallen Agent is a story of love and hate, of loyalty and betrayal, of revenge and callous disregard for human life in the pursuit of satisfaction.

The strapline for the book is: Can a killer escape their past? And that’s where the story begins.

This book has a rather extended dedication. It tells anyone all they need to know about the motivation for the story. Here it is.

The Fallen Agent was inspired by the BBC TV drama Spooks, in particular Season 3 Episode 6. This book is dedicated to every single person who had anything to do with bringing that finest of British TV dramas to the small screen. Thank you one and all.

Initial feedback for The Fallen Agent from those long-suffering family and friends who usually read my stuff first has been positive and encouraging. My ever-critical daughter (love her) gave it a 7/10 – praise indeed by her miserly scoring standards. She did need to borrow some money, though.

Caroline at bitsaboutbooks has very generously organised a blog tour for the launch of The Fallen Agent. I’m also very grateful to her for other sound advice related to aspects of bringing a book into the world.

The Fallen Agent is out on 10th October and is available now for preorder here:

Many thanks for your ongoing suppport of my writing. 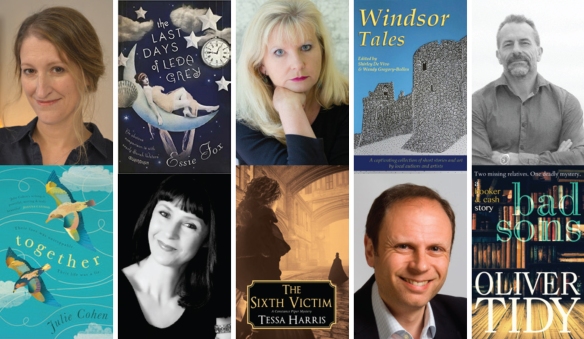 If you’re reading this post because you ‘Follow’ my blog, may I say a big thank you for hanging on and bearing with me through what has been a rather lean period in terms of blog posts and story writing. Your ongoing support of, and interest in, my writing life is sincerely appreciated.

The good news, as far as my writing is concerned, is that my summer hiatus should now be at an end. I’ve been working pretty solidly on fixing up a property where my family can live, now that we’ve relocated from Turkey to Romney Marsh. That’s just about habitable now – who needs internal doors and curtains and carpets? And I’ve always thought indoor plumbing a bit of an indulgence. Plastic buckets work just as well as flushing toilets and they’re portable, which means you don’t even need to get off the sofa or out of bed when nature calls.

And so to the main purpose of this post. As part of this year’s Windsor Festival a ‘meet the authors’ evening is being put on. I’m taking part. It’s happening this coming Thursday, 21st September. It’s a ticketed event. (I hope they don’t expect to me to buy one to listen to myself. I can do that for free here.)

I’m going to be on a panel with the four other authors pictured in the banner above.

The brief is that we each have seven minutes to fill (surely, talk eruditely to the audience?) about our book and writing related stuff and then there will be a Q&A and then a book signing. Am I daunted at the prospect of sitting shoulder to shoulder with authors whose books can be found in actual bookshops? What do you think? I’ve ordered some Tena pants from Ebay this morning. I hope they arrive in time and don’t rustle too much when I move.

I’m very much looking forward to the evening and I would love to think that there is at least one person in the audience who has the faintest idea of who I am. If any of you should be free on Thursday and can attend, I’d love to meet you. I’m prepared to beg, but not pay for your ticket.

One weight off my mind for the day is transport. I spent all my money fixing up the new place. I’ve been cycling everywhere for three months. A friend has offered to give me a ride up there. We’re leaving Romney Marsh early Tuesday morning. Be prepared for long tailbacks on the M25.