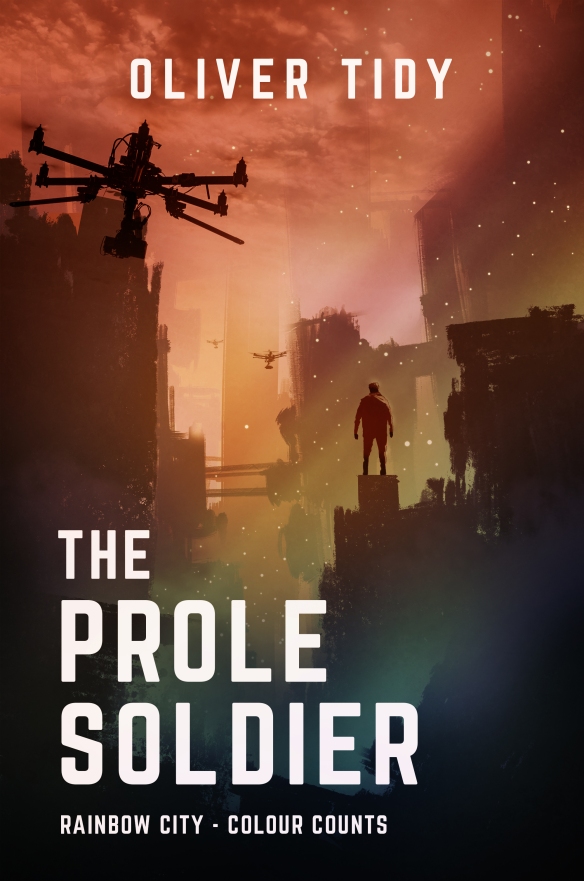 I am very happy to share the rather excellent cover for my next release: The Prole Soldier. It is available for preorder from Amazon UK and Amazon US as of today by clicking on the blue highlighted links. Publication date is 20th February.

The Prole Soldier is a departure from my usual crime and thriller writing and contributes to my ambition to write in different genres. If I had to choose one category to list it in it would be the wonderfully named ‘speculative fiction’.

As the title suggests (I hope) the story is strongly influenced by George Orwell’s 1984. I read other books that encouraged me for this one: We by Yevgeny Zamyatin. The Iron Heel by Jack London. The Handmaid’s Tale by Margaret Atwood. Brave New World by Aldous Huxley. Fahrenheit 451 by Ray Bradbury.  There were also films, notably The Hunger Games trilogy. I was going through a phase. Actually, I’ve been rather susceptible to a good dystopian tale for as long as I can remember. I intend to make The Prole Soldier the first in the Rainbow City Trilogy.

I wrote TPS while I was in living in Ankara. There’s a good reason why it’s taken me so long to self-publish it. (When I remember what it is, I’ll write a blog post about it.) For now, I only want to celebrate the fact that TPS has finally gone into labour.

Here is the blurb:

Theo lives and works in the Blue Zone of Rainbow City. He is almost sixteen at which age he will begin four years conscription – military or mines. He wants neither. He hates his life and despises the cruelty, injustice and inequality that prevails. When the opportunity arises for Theo to be involved in the fight for change he grabs it, knowing that failure will cost him everything.

If you missed the links above, here they are again. Amazon UK Amazon US. As always, all support for my writing is sincerely appreciated. Thank you.

1 thought on “The Prole Soldier”