A celebratory breakfast at my local simit shop.

How hard it is to find a title for a book these days that hasn’t already been done. I want to be original with titles where possible. It’s nice to be original (I don’t think I’ll ever top Particular Stupidities) but it’s not easy. Example: Booker & Cash #3. Working title has been Waifs and Strays. It’s a good fit. But there must be at least a million books on Amazon called Waifs and Strays. So I always knew eventually I was going to have to change it. (Also it’s too many letters.) But to what?

Honestly, I’ve agonised over the title of this book the last few days. Literally agonised. Problems I have with a title are: it’s got to reflect the content of the book, it’s got to be original and it’s got to fit in with the other two titles already in the series. By that I mean… well look here: 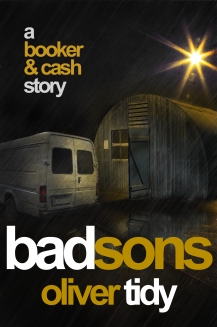 You can see the titles occupy one line only. I want to continue this theme. That gives me 7,8 or 9 letters at a pinch to play with. I wanted two words, two four letter words (not like that) so the white and mustard contrast would be even. Can you see I’m painting myself into a corner over this? Narrowing my options?

It’s sorted now. The flash of inspiration will always come, given time. Poor Hands. It might not be the catchiest thing out there but (a) it reflects the story (b) it’s original and (c) at 9 letters over two words I’ll get that colour contrast on one line effect.

And it provoded me an opportunity right at the end of the book for a bit of ‘funny’ interaction between David and Jo. I think a laugh is as nice a way to finish a story as anything. Blimey, I nearly forgot to mention this week’s big news in my Diary of a CWAP – the first draft of Poor Hands (Booker & Cash #3) is completed, hence the celebratory breakfast.

The ‘funny’ thing this week is that after I’d sketched this blog post and before having another read through Poor Hands I thought to take a look at B&C#4. (I started this with an idea about nine months ago and I wrote 10000 words before putting that on hold to finish B&C#3.) I had another inappropriate working title for it and after reading through it once the perfect title hit me. It fits most of criteria except it’s been used many times before. Booker & Cash #4 will be called Death Wish. I think it’s the best B&C opening I’ve written. Can’t wait to crack on.