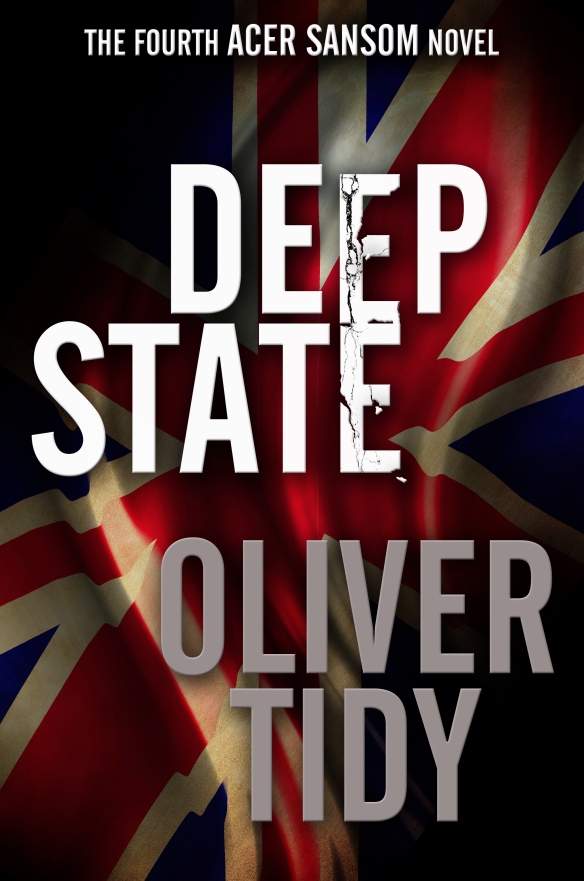 Many of you will know that last Saturday, 12th March, my Kindle Scout 30 day campaign ended for Deep State (Acer Sansom #4). For any one who doesn’t know about Kindle Scout here is a link that explains things. Kindle Scout

This week has been a waiting game to see whether the book would be chosen by Amazon for publication through its Kindle Press imprint . Yesterday, Friday,  I received an email from Amazon letting me know that the campaign had been successful.

Those of you who nominated the book should receive a thank you notification from Amazon, but I would like to repeat my sincere thanks to all those who nominated, shared, encouraged and helped to otherwise spread the word. Once again: writers are nothing without readers (and supporters).

Just a reminder, all who registered a nomination for Deep State will receive a free ebook in advance of publication day.

Despite best intentions to not get too ‘involved’ with the minutia of the campaign it was difficult not to: check ups of page views, Hot and Trending stats, pestering readers and supporters for nominations, for examples.

I’m going to devote this blog-post to providing some feedback on my experience of the process in case any one ‘out there’ is looking for information on what to expect and what they need to do to be successful. (Disclaimer: apart from the screen grabs of my stats it’s all guesswork.)

During the campaign, nominees get access to three stats in graph and chart form below. A bit ignorant, I went into the campaign believing that one simply must perform well every day to be in with a chance of getting chosen. My stats show you that you don’t need to. This leads me to consider other reasons why DS was chosen.

As can be seen from the chart below DS did not spend a lot of time in Hot & Trending during the campaign: 206 hours out of a possible 720. That is not particularly encouraging. It received a good boost at the beginning because I posted on my blog and social media and supporters responded wonderfully. The spike in the middle was a Facebook post trying to reach any one who had missed news of the campaign. The spike at the end, I suspect, came because on the last day of campaign all books feature on a sidebar category ‘Ending Soon’ and many Kindle Scouters will only look then and if they have a vote to use up will take a punt on a book in the hope of a free copy. Just my feeling for the system. 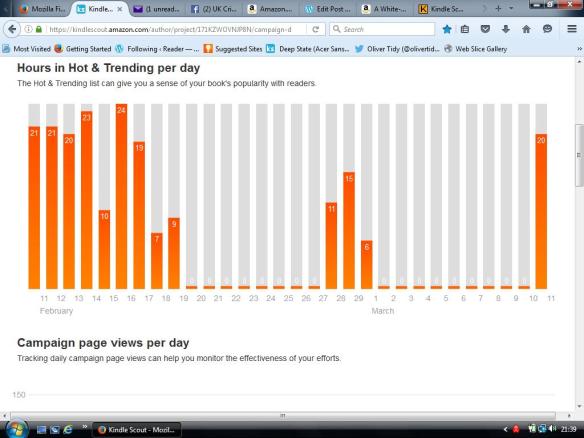 Campaign views per day graph. Nothing to get too excited about.

And finally the ‘where did the traffic come from’ pie-chart.

Based on the above stats it would be a confident person to bet on their book getting through. But selection is, obviously, not just a matter of stats. I did some digging, like you do, and found a couple of other successful candidates who had not set the world alight with their campaign stats. This, I believe, should give encouragement to anyone thinking of submitting to KS who does not have a huge social media reach or the time and energy to spend thirty days and nights badgering the online world to support their entry. Get the other things right (see 1-5 above) and you are in with a chance.

It’s worth mentioning that I came across a few past candidates who have also shared their experiences and their stats. Some had not been successful and their stats put mine in the shade (more than double my time in H&T and one guy claimed to have over 6000 pages views.) I’m not speaking about them individually when I say that it’s good to know that just because someone is able to drum up a lot of support for their book they will not automatically succeed.

The bottom line is stats are not the be all and end all of a Kindle Scout campaign. Getting yourself noticed with some H&T hours is not a bad thing and something everyone should aim for.

The main advantage that I associate with being selected for publication is that Amazon will, probably, want to make the most of their investments by giving the books it takes on some valuable exposure in the world’s biggest-by-far, highly competetive ebook marketplace. That will be good for the book in question, the author’s name (so long as the book is reviewed favourably by readers), and possible positive knock-on effect on an author’s other books.

In my particular case, I hope that the other three books in the Acer series will receive some benefit from having Amazon get behind #4. We will see.

Other details involved are: there is a $1500 advance on future sales. Advance being the operative word. It’s not a prize. Who knows how long that will take to make? Royalties are paid on a 50/50 split on the net revenues, as opposed to 70/30 in the author’s favour when you self-publish. The contract states that Amazon reserve the right to produce an audio book. What fun that would be but realistically as the book is #4 in a series, it’s unlikely that Amazon will choose that option. (If they do I want to audition.) As I understand it, successful candidates also get a Kindle Scout T-shirt.

Another potential benefit of being selected is that it’s something to go on the writing CV. I am thinking seriously about touting something of mine to agents because I do still and will always want to be traditionally published. (Just one book. Is that too much to ask?) When the time comes to make my submissions the Kindle Scout submission will be something to put in the covering letter along with a copy of my Cycling Proficiency certificate.

It’ll likely be a few weeks before the book becomes available. Amazon and I have some paperwork to attend to and, as I understand it, when I have had a chance to review the manuscript I submitted one last time Amazon will then pass it on to their editorial services who will go over it looking for ‘improvements’ that can be made. I notice from the Kindle Scout page that some books have been in the production stage for several weeks.

Lastly, I want to say what a truly wonderful community the writing community is. Readers and fellow writers. Within minutes of posting my news on social-media I was inundated with messages of congratulations and good will. In what can sometimes be a rather unpleasant world it’s good to be part of something filled with goodwill, encouragement and positivity.